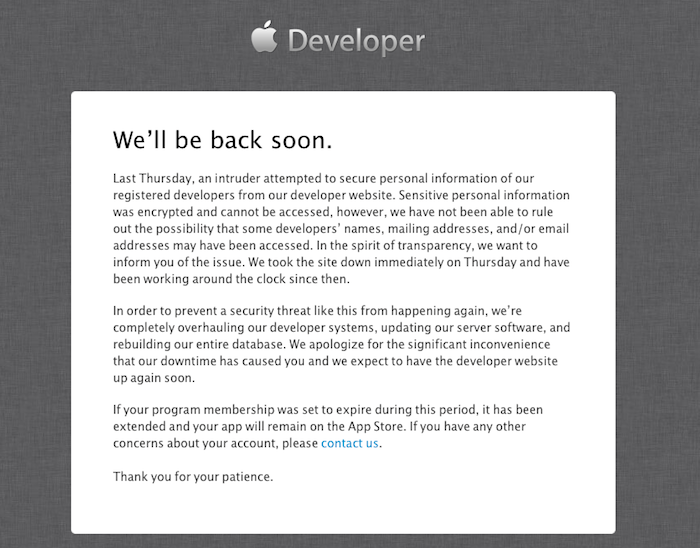 My name is ibrahim Balic, I am a security researcher. You can also search my name from Facebook’s Whitehat List. I do private consulting for particular firms. Recently I have started doing research on Apple inc.

In total I have found 13 bugs and have reported through http://bugreport.apple.com. The bugs are all reported one by one and Apple was informed. I gave details to Apple as much as I can and I’ve also added screenshots.

One of those bugs have provided me access to users details etc. I immediately reported this to Apple. I have taken 73 users details (all apple inc workers only) and prove them as an example.

4 hours later from my final report Apple developer portal gas closed down and you know it still is. I have emailed and asked if I am putting them in any difficulty so that I can give a break to my research. I have not gotten any respond to this… I have been waiting since then for them to contact me, and today I’m reading news saying that they have been attacked and hacked. In some of the media news I watch/read that whether legal authorities were involved in its investigation of the hack. I’m not feeling very happy with what I read and a bit irritated, as I did not done this research to harm or damage.

I didn’t attempt to publish or have not shared this situation with anybody else. My aim was to report bugs and collect the datas for the porpoise of seeing how deep I can go within this scope. I have over 100.000+ users details and Apple is informed about this. I didn’t attempt to get the datas first and report then, instead I have reported first.